Vending machines have been around for decades. They started with humble beginnings and quickly rose to popularity all over the world. We’ve rounded up five fascinating vending machine facts for you to enjoy below.

Vending machines were first introduced in London during the 1800s. Businessmen wanted a way to get a quick snack or postage on the go, and vending machines were the answer. They dispensed quick things to eat like apples or other fruits along with postage, chewing gum, and newspapers.

However, they didn’t dispense soda until the 1920’s, when you could choose from Classic Coke or Pepsi in a cup. Bottled soda vending machines appeared in the 1930s. They started dispensing cigarettes and evolved into the full line vending machines that you see today that dispense small toys, food, snacks, and beverages.

While some categories have been popular for decades, the novelty vending machines didn’t start to take off until the early 2000s when vendors decided to branch out to things like small toys or even bait and tackle.

When most people think of entrepreneurs, they think of big businesses, but vending machines are very popular among entrepreneurs. While this may come as a surprise, it makes a lot of sense. One of the biggest draws of this business is that the initial investment for Melbourne vending machines is typically very small, and you can be your own boss.

Your Melbourne vending machine also runs 24 hours a day, 7 days a week with no issue, and it can generate income around the clock. The products are usually well known, and it’s a cash business, for the most part, so you don’t have to worry about bad payments or bounced checks.

In early 2012, vending machine companies started to switch their product line focus to healthier options in response to the nationwide obesity epidemic. Along with the traditional fatty or sugary beverages and snacks, they started offering things like mineral waters, Gatorade, dried fruit, soy and low-fat options, and protein-packed snacks.

QualityVend evolved even further since then, and you can now have Sydney vending machines with full healthy meal options, a variety of snacks, beverages, and fresh or frozen options. Additionally, you can pay for your Sydney vending machine choices with cash, credit or debit card. You don’t have to worry about carrying change or small bills around each time you want to use the vending machine.

If these five fascinating vending machine facts have you wondering what QualityVend can do for you, contact us. We’re ready and willing to answer all of your questions, and we look forward to hearing from you!

GET YOUR FREE MACHINE TODAY! 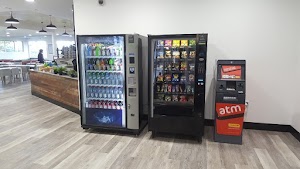